Andy Johnson Goes For Four With Online MBA in Entrepreneurship 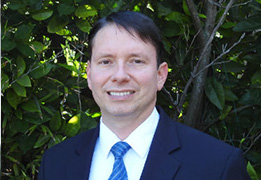 Entering a master’s degree program is a big step for anybody, but it’s a regular occurrence for Andy Johnson.

Johnson is enrolled in the Master of Business Administration with an emphasis in Entrepreneurship online program at the University of West Florida. When he graduates in spring 2018, he will be the proud holder of four master’s degrees. That’s right, four.

“I’ve always had this entrepreneurial bent,” Johnson said. “I’m a little bit of an inventor. I always felt that I had all of the science and technology background, but I didn’t know the rest of the business side of things.

“I needed to get that knowledge so I could bring a lot more ideas and inventions to fruition. I’ve invented things ever since I was a little kid; I’m always tinkering with stuff. Another reason I decided to go back to school is I thought it might help me in my current career.”

Johnson is a molecular biologist and data scientist for a science and technology company and lives in Destin, Florida, so he opted for the online route.

“I did a search for all of the schools in the area,” Johnson said. “I looked and compared the curricula and the way the different programs were all organized. Then, I saw that UWF was just starting the online MBA — I think they started it a month or so before I applied.

“I really liked the flexibility. I like the way it is set up where you take one class at a time. In those seven weeks, you do nothing but that one class so you really master the material. It just seemed like their program covered all of the bases and is teaching me what I need to know.”

Johnson, who grew up in Rome, Georgia, went to Marine Corps Officer Candidates School after he completed his undergraduate work at VMI. After meeting the service requirement, he enrolled in graduate school in Hawaii, where he lived and worked for seven years.

“I just had the opportunity,” Johnson said. “I like to learn useful things I can use and be productive with — that’s why I did each of the master’s degree programs. I think the MBA may, at the very least, enable me to bring some of my inventions and business ideas to fruition and maybe help me build a business on the side.”

Johnson, who has excelled in science since childhood, said the invention he is most proud of is a bio sensor that involves molecules called aptamers. So far, Johnson said the online MBA program has been tremendously beneficial in helping feed his insatiable thirst for knowledge.

“This has been one of the best decisions I’ve ever made,” he said. “I’ve been able to apply the information from the MBA program to my job a lot more than I thought I would. I wish I had done this sooner. After a couple of weeks, I really knew what to expect. I figured out how I would balance all of my time. I usually just wake up early and try to do everything in the morning. I average about three to five hours a day on school.”

Johnson said two courses in particular, Business Process Integration (GEB 5878) and Information Business Analytics (ISM 6137), have provided him with the most insight.

“Business Process Integration was very valuable,” he said, “That helped teach a lot of the basics, a lot of the foundations, how to look at financial statements, and it gave a broad overview of many of the other things we’d be learning. I particularly enjoyed that.

“Business Analytics, which I’m taking now, goes hand-in-hand with what I do at work. It’s a little bit different application of statistics and data science. It makes me think. It’s very interesting, very useful stuff.”

Johnson said he likes the format of the online MBA program not only for its flexibility, but also for its structure and organization.

“The way the curriculum was set up … they covered all of the bases,” he said. “Everything was very logically organized, and I really like the way it’s a new class every seven weeks. For seven weeks, you concentrate on just that one class.

“It’s still a lot of work, but what it does save me is having to drive to campus two or three times a week. It does provide a good degree of flexibility if you have a career you don’t want to abandon.”

Johnson said education has always been important in his family. His father earned an MBA. Still, when he told his friends and family members he was going back for a fourth master’s degree, he got some mixed reactions.

“Some of them asked, ‘Why?’ Others said, ‘It’s a good program,’” he said. “A couple of them might jump on the bandwagon.”

Johnson, who enjoys paddleboarding and kiteboarding in his free time (Mahalo, Hawaii!), said he plans to attend his graduation ceremony and clear room on his wall for another degree. Johnson is happy he decided to return to school and give online education a shot.

“You have to be prepared to budget your time, work on writing a few long papers for your portfolio and try to really actually learn and take in what they’re teaching, other than just check the blog,” he said. “They’re giving us good knowledge in this program.”

Learn more about the UWF online MBA with an emphasis in Entrepreneurship program.