How Women Are Changing the World of Business

Despite advances in education, policies and laws supporting gender equality during the twentieth century, examples of women in leadership roles in the business world were few and far between. In general, the boardroom remained an elusive prize, seemingly destined to remain for men only.

In 1972 Katharine Graham became the USA’s first female Fortune 500 CEO when she took on the position of CEO of The Washington Post. Since that time, slowly but surely women have been claiming a larger role in the boardroom and have been legitimizing their rightful place as leaders in business. Today, women like Ginni Rometty (IBM’s first female CEO), Indra Nooyi (CEO of Pepsi) and Sheryl Sandberg (Chief Operating Officer of Facebook) are among the world’s most powerful business leaders and are inspiring icons that show the world just what women in the boardroom can accomplish.

Why Women Excel as Leaders 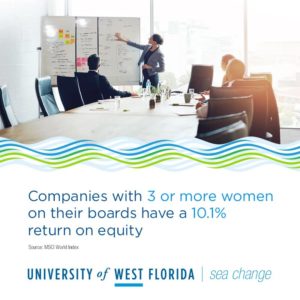 While people often stereotype women as more emotional and less aggressive than men (traits typically seen as undesirable for corporate leaders) there is no statistical evidence that organizations led by women are less competitive. In fact, in a study of 1,643 companies, the index provider organization MSCI found that corporations with three or more women in the boardroom appear to enjoy an average 10.1%return on equity. Companies without a significant number of women on the board only saw a 7.4% return on equity.

Although the authors of the study could not definitively explain the reason for the higher return, they stated that, “academic research in management and social psychology has long shown that groups with more diverse composition tended to be more innovative and made better decisions.” The findings also show that corporations with more women in leadership roles experience fewer corporate scandals because women tend to indulge in less reckless risk-taking: “Companies ranked in the bottom quarter in terms of gender diversity on their boards were hit by 24% more governance-related controversies than average.”

A Better World Means Better Business For All

Furthermore, in general, women tend to exhibit a higher capacity than men for empathy, as well as a stronger ability to influence others and engage in conflict resolution. These skills often lead women to become actively involved in social and political groups that work to eradicate world hunger, social inequality and poverty. When these leaders direct this social activism internationally, it helps other countries create more stable and prosperous economies. This, in turn, helps world markets stabilize and grow, which positively influences the global economy.

In a groundbreaking 2012 study by Jack Zenger and Joseph Folkman entitled “Why Women Are More Effective Leaders than Men” the researchers found that, overall, women actually possessed more leadership qualities than men. Zenger Folkman stated that “In fact at every level, more women were rated by their peers, their bosses, their direct reports, and their other associates as better overall leaders than their male counterparts.”

Zenger Folkman analyzed data from 360 evaluations of 7,280 corporate leaders from both private and public, national and international organizations. They asked people to evaluate each business leader’s overall performance and also to rate how strong the leader was based on a list of 16 essential skills. These skills included such things as initiative, self-development, communication and motivational skills and fostering teamwork. Zenger Folkman found that “Specifically, at all levels, women are rated higher in fully 12 of the 16 competencies that go into outstanding leadership. And two of the traits where women outscored men to the highest degree — taking initiative and driving for results — have long been thought of as particularly male strengths.”

Zenger Folkman surmised that one of the main reasons that women in corporate leadership roles excel is because they feel that they must continually combat the still-lingering prejudice that — unlike men — they are not naturally suited to the business sphere. This prejudice propels women in leadership roles to constantly work at their optimal level and continuously strive to improve their positions. Even when they are at the pinnacle of their careers, female leaders feel they must constantly prove they belong at the top.

Women appear poised to continue to pursue an even bigger piece of the corporate world in the coming years. The number of female CEOs continues to grow; in 2015, 22 Fortune 500 companies had women as CEOs. Another positive sign is that 40% of the students pursuing MBA programs at the top schools are women. While there is still a long way to go in establishing parity among men and women in the boardroom, women in leadership roles and their positive influence on the business world at large is a trend that shows no signs of abating.

World Economic Forum: Itâ€™s official: companies with women on the board perform better

LinkedIn Pulse: Women in Business: Why it is important to have women in leadership positions

Forbes: More Women In The Boardroom? It’s An Intense Workout, Not A Light Jog

Business Insider: Why Women Are More Effective Leaders Than Men

The New Yorker: DO MORE WOMEN ON THE BOARD MEAN BETTER RESULTS?

Harvard Business Review: How Many Women Do Boards Need?

Stephanie Sandidge Earns Online MBA From Other Side of Globe
It’s a small world after all. Florida native Stephanie Sandidge earned a Master of Business Administration online from the University…
Read more
April Wyman Makes Future Plans With Help of Online MBA
April Wyman hopes to become a project manager after she graduates with a Master of Business Administration degree from UWF…
Read more
5 Top Jobs for MBAs in Florida
The most popular graduate business degree is the Master of Business Administration (MBA), according to Poets & Quants. MBA programs…
Read more
Fast-Track Your MBA Online
You want to advance your education and earn a Master of Business Administration in order to make more money at…
Read more
Grow Your Marketing Career With an Online MBA
You could almost categorize master’s degrees as cool — they’ve become popular over the last decade, and this educational trend…
Read more
Why Does Accreditation Matter So Much?
You are a working professional on the move. You are thinking of spending a huge amount of time and a…
Read more
Why Online For an MBA Program?
Flexibility is usually a key reason why career-minded individuals like Alexia Swain choose to pursue advanced degrees like the University…
Read more
Alexia Swain Takes Unusual Path Through Online MBA Program
The online Master of Business Administration program at the University of West Florida quickly went from a sprint to a…
Read more
Erin Jeffreys Stays at UWF, Gets Down to Business
Even as Erin Jeffreys was about to graduate from the University of West Florida with a Bachelor of Science in…
Read more
Kim Washington on Track to Graduate With Online MBA
Kim Washington didn’t mind her grandfather, James Lewis, Sr., leading her down a career path. As long as it wasn’t…
Read more
Online MBA Student Denis McKinnon III Keeps Family Traditions Alive
Denis McKinnon III was ready to answer when destiny called. Just like the majority of his family members, the Pensacola…
Read more
Choose your emphasis with an online MBA program
If you are looking to advance your career, increase your earning power and expand your business skills, an online MBA program might…
Read more
Have a question or concern about this article? Please contact us.